Since I don’t trust traditional media (television, radio and print) as unbiased and reliable news sources, I have three favorite Internet news sites that I visit daily. The first is Mic, whose credo contains the statement, “All of us believe that stories and information have the power to shape the world, especially when they challenge traditional narratives.” Mic was created by and targets the millennium generation and currently has an audience of over 30 million people a month.

What I like most about Mic is its fresh perspective the content and presentation of current events. Although I’m older than the millennium generation, I think my and other older generations have too often overly influenced by powerful left or right-wing slanted news media. I really appreciate the fact that Mic is more mainstream even when reporting political stories, For example, today’s was Donald Trump Claims Ted Cruz “Stole” the Iowa Caucuses, and Calls for a Do-Over. I really like how this author used Trump’s Twitter feed to enhance the story. 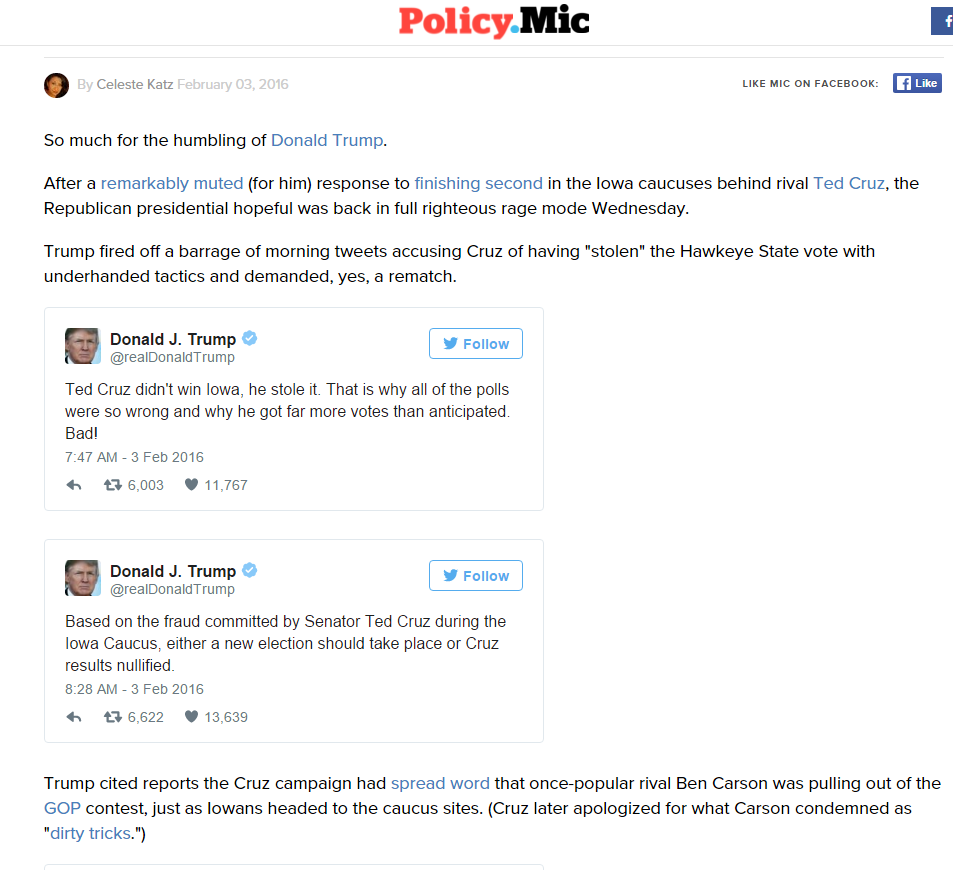 Although Vocativ does not target any particular generation, it is one of my favorite news sources. What I like most about Vocativ is that it uses visual storytelling and deep web analytics (the deep web is the part of the web not accessible by standard search engines—more information about Vocativ’s deep web analytics can be found on their About page). One of Vocativ’s best features is their YouTube channel. Here is an example of one of their amazing visual stories:

My third, and favorite, Internet news site is The Intercept, which is an online magazine that holds the same beliefs as I do about the purpose of media. On the The Intercept’s welcome page, its three creators, Glenn Greenwald, Laura Poitras and Jeremy Scahill wrote, “We believe the prime value of journalism is that it imposes transparency, and thus accountability, on those who wield the greatest governmental and corporate power.”

The Intercept is an online magazine that was first created in 2014 to report on Edward Snowden, the whistleblower that worked as a National Security Agent. What makes The Intercept unique is that reports not only on stories about the rich and powerful but will provide sensitive documents and when appropriate, its sources.  For instance, the following is one of the documents from leaked by Edward Snowden:

Frightening, isn’t it? Because traditional media is owned and controlled by a handful of corporations that also control many of U.S. policies and policymakers, online news sources is the only avenue by which Americans can keep their politicians and these billion-dollar corporations transparent and accountable. Without this transparency and accountability, all Americans are vulnerable to oppression and exploitation by those in power. A free and unbiased media is the only way for us to safeguard our heritage of liberty and freedom of press. Censorship comes in many forms; today, that form is the almighty dollar.  I hope that these huge corporations don’t do to the Internet what they did to television, radio and newspapers.