So I usually change up my newest web addiction every couple months because let’s face it, I’m a creature of change. However, Facebook may be the only constant thing in my life that I regularly go to. Instagram, Twitter, Pinterest, Tumblr. All wonderful forms of social media that would make my life boring without them. Facebook kinda trumps them all though.

Another good thing about the site is that it’s always evolving but yet can’t do anything wrong. When they bought out Instagram and people’s pictures turned to links on Twitter, people on Twitter were pissed. But did they still have a Facebook page? YES.

The content is also great. I don’t know if you’ve ever noticed, but each social media site has its own personality. Pinterest is DIY, Tumblr is indie blogs, Twitter is people ranting about nonsense. Facebook is a little bit of everything. From feminist post’s to Super Bowl party recipes, they really have it all (my favorite are the cute kitten videos) 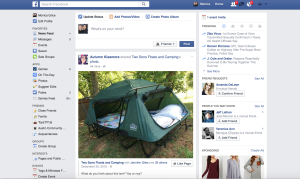