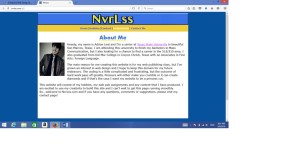 Well, even though I can’t say that my best class is web pub, I can say that it’s my favorite one to attend. I have definitely learned a lot about simple coding and how websites are actually created. I think that every assignment that we’ve had has been crucial to understand in order for the next project to function, but I would have to say that my favorite one is the Intro to CSS. The first project was fun, but when I was able to recreate my website into something that appears more professional, it made me feel like I had accomplished something great. Designing the logo, choosing the colors, and implementing the functions to my website was an awesome experience.

On the other hand, my least favorite was the responsive exercise. I will have to put in a little more time to understand it a little better because I was completely lost trying to learn how to size up my page. I didn’t have any problems with the fluid grid, but I could not figure out the CSS sidebar. After putting in hours watching videos and researching the sidebar concept, I threw in the towel. Everything I did to try to adjust my page would only make it worse and it wouldn’t function. So I’m probably going to see if there’s a tutor that can help me understand it better.

I think the most important thing that I have learned so far has to be HTML in general. I have used HTML for FDOM, but we didn’t go over as much info as we have in this class. Some of the things I would have to include though, has to be Photoshop and the CSS concept. Photoshop is something I have always heard of and after using it, I would really like to add it to my PC. It’s just kind of expensive, but I’ll make an investment eventually. I have enjoyed this course so far and I’m excited to see what’s up next.