The only website I use every single day is Google. It is without a doubt the most popular search  engine available. The layout of Google’s main page is relatively plain and simple. It’s a white background with the colors blue, yellow, red, and green used for the title letters. I’ve never been real big on using any of the special features such as “I’m feeling lucky,” but some people do. Google News, an optional tab on the homepage, is a great way to stay up to date on everything going on in the world.

To me, the Google search engine is probably the most valuable tool we have today, especially now that we can use it on our phones. The thought of being able to answer practically any question I have, about anything, at any time, in a matter of minutes (sometimes seconds), is amazing to me. I’ve never been one to obsess over technology, video games, or any other kind of ap. But, I use the living hell out of Google. 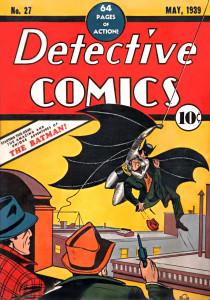 I love history, and search engines are the quickest and sometimes best way to learn more about things of that nature. Google is my library card. It’s hard for me to remember a time I haven’t used it. But I seem to recall getting into it when I was about 9 or 10. I was hard core into collecting vintage comic books at the time, and Google and eBay (along with my price guide) where the only things I used to learn more about them. It didn’t take long for me to memorize the date that every major super hero was first introduced and the amount of money each of their first issues could rake in. For instance, since I was about 10 year old, I’ve memorized little tidbits like Superman first appearing in Action Comics #1 in June, 1938. Or, that Amazing Fantasy #15, the first appearance of Spiderman was worth around $45,000 in 2003 (in near mint condition, of course). Personally, I was most interested in Batman. The first Batman comic was being priced close to $300,000 when I was about 10. This of course, was well before the Christopher Nolan Batman saga, and comic book heroes weren’t quite so commercial. Because of that, I started to lose interest in comic books.

However, there are many many more topics I have moved to since then, including film history, as well as blues and rock and roll history. Again, I would not be able to learn so much so quickly without Google.

From age 9 and onward, I’ve done nothing but fill my brain with information and knowledge (a lot of it useless) to store away for when I need it. I’m very grateful to have access to a tool like this; it makes me feel powerful. But don’t take my word for it, check it yourself. Google