I feel my experiences in this class to be positive overall so far. I was a bit intimidated by the thought of coding in HTML. I spent the time between semesters reading several books about the programming language in preparation for this class. I feel this course to be the most stressful out of my five this semester. That mainly has to do with the fact I lack knowledge on the subject. For a class meeting once a week, the workload is bearable. I like how the projects aren’t due every single week, which provides me ample time to get them done. I’ve already learned a great deal from being in the class. I feel the fast-paced nature at times forces me to learn quicker; sink or swim basically. Having notes to compare with your code helps out substantially. My favorite project so far has been creating my own bio website. Looking at the list of requirements  for the project is rather intimidating. You just have to start with one thing at a time and eventually link all your work together. This was my favorite endeavor because I felt really accomplished after it was finished. There was a substantial amount of work that went into it and being able to show off a finished product is extremely fulfilling. My least favorite project was the troubleshooting exercise. 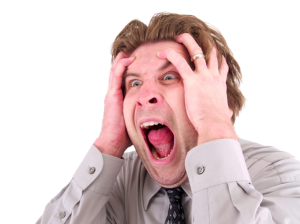 It was very difficult to sift through lines of code and figure out what was wrong. It was extremely tedious. I’d get something working properly and then one slight change would throw everything off. Ultimately I felt I did well on the exercise with only a few items lacking from my finished product. It did make me want to rip my hair out in frustration however. The most important thing I have learned so far in class is to do focus on one thing at a time. The requirements for the projects are intimidating and lengthy. Trying to do multiple facets at once would be overwhelming. Doing one thing at a time on a sheet of paper is the best way I’ve found to be successful in this class. Also making sure quotations are in the correct coding format when cutting and pasting is very important as well.