This class has been much more time consuming than I originally expected, but most of that is probably because this is a summer class. That being said, I have thoroughly enjoyed this class.

My favorite project in the class has been a combination of Project 2 and the responsive exercise. In the very beginning, my website was so ridiculously basis, as seen here. During project 2, we were able to build on our website and make it something actually aesthetically pleasing. The responsive exercise helped make our websites even cooler. 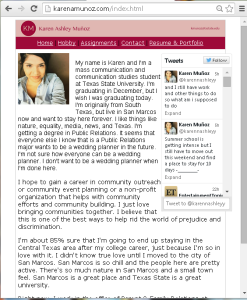 I’m sure this bootstrap assignment is going to end up being my favorite assignment once we’re done with it, though.

I can’t say that I’ve had a least favorite assignment in this class. Because our projects have built on one another, it’s hard to separate them from each other. Project 2 could never have gotten where it was had I not first completed Project 1. Project 1 was definitely my worst assignment, thus far, but I wouldn’t call it my least favorite.

My overall favorite thing about coding (and, in turn, this class) is that working with code and building a website is such a tangible accomplishment. As we’re coding, we can see our website being built. Instead of working on a project and waiting until the final product is completed to see the results, coding is great in that it allows you to see your progress as you’re progressing. It’s pretty gratifying to be able to actively build something, which is what we’ve been able to do in this class.